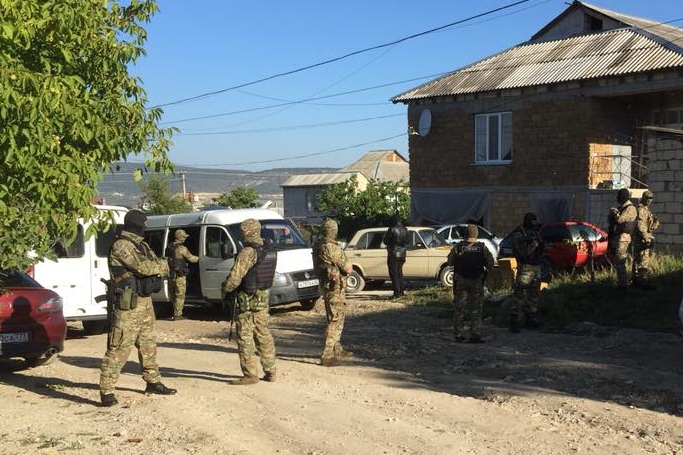 At the Titan factory in Armiansk, an accident occured, which led to a catastrophic ecological deterioration and made the territory dangerous to live; security officials searched Marlen Mustafaev’s house; another search was carried in the Old Crimea town, in the Kulametovs family; Asan Chapukh, a political prisoner, the defendant in the “Vedzhie Kashka’s Case”, went on a hunger strike; the non-admission of Ukrainian human rights activists to an information on the status of the Kremlin’s political prisoners remains a topical issue. The Crimea SOS observation.

At the Titan factory in Armiansk, an accident occured, which led to a catastrophic ecological deterioration and made the territory dangerous to live. Ukraine called on the European Union to take additional sanctions against those who are involved with Ukrainian political prisoners arrests. Behind time the Russian Federation provided the ECHR with questionable information on the health status of 4 Ukrainian political prisoners (Stanislav Klich, Volodymyr Baluch, Emir-Usein Kuku, and Serhiy Lytvynov). At the same time, the pressure was exacerbated on Crimean Tatars through searches and administrative arrests.

At the end of August, in Armiansk and Krasnoperekopsk, massive complaints occured about the rusting of various items, including domestic ones, and on September 3 in the Kherson region, the toxic substances were detected in the air. At the same time, a statement was made on the Emergency Situation at the Titan factory (Armiansk, Crimea), which happened on August 23. During the day, doctors recorded an increase in the number of appeals to the Armiansk medical institutions. On September 4, it was decided to take children from Armiansk to sanatoriums, and the work of Titan was suspended. Due to the ecological disaster, the Kalanchak and Chaplinka checkpoints have stopped their work during September 6-15. Despite the statement of the so-called Ministry of Health in the Crimea, the diagnosis of toxic poisoning was massed. At the same time, after returning from the temporary evacuation, Armiansk residents found acts of looting in their homes.

Pressure on the Crimean Tatar activists continues through the unexpected searches. On September 4, security officials searched Marlen Mustafaev’s house. He was sentenced to 12 days of administrative arrest under the Art. 282 p. 1 of the Criminal Code (Incitement to or stirring up hatred on national grounds committed publicly or with the use of the Internet). The appeal was rejected by the de facto court, and the hearing was held without the Mustafayev’s presence, and with the photo and video fixation prohibited. On September 16, Mustafayev came out of a 12-day administrative arrest. However, a few days earlier, on September 13, a search was carried out on Osman Bilyalov, an activist who was also accused of Art. 282 p. 1 (earlier he was accused of an unauthorized rally in 2016). Bilyalov was arrested for 5 days, indicted for the propaganda of extremist organizations’ symbols, and he was also a witness in the Mustafayev’s case. At the same time, these are not the only searches of the Crimean Tatar activists: in the Fontani-5 microdistrict (Simferopol), a search was carried out in the family of a school teacher of the Crimean Tatar language. The reasons for the search remain unknown.

Another search was carried in the Old Crimea town, in the Kulametovs family. The activists assume that this search is related to Marlen Mustafayev’s search. After the search, Zakkiy, Zarema, and Rehanna Kulametovs were arrested and were not allowed to be visited by a lawyer. Zarema Kulametova is the mother of the Crimean Tatar activist Giray Kulametov, earlier detained for his participation in a series of one-man protests. She was prosecuted under the Art. 319 of the Criminal Code (Insult of a Representative of the Authority) – an administrative arrest. During the search at Kulametov’s house, Zarema was kidnapped from the park, where she performed community work. On the same day, the Kulametovs’ trial was held, in which Zakkiy was sentenced to 5 days to the administrative arrest for his resistance to the security forces during the search, and 5 days more for the prohibited symbols’ publication on Facebook; Zarema was sentenced to a fine of 1000 RUB for the “Propaganda and a public demonstration of Nazi attributes”. It is important to note that all the publications, Kulametovs were charged for, contained exceptionally statements against the annexation of Crimea.

Asan Chapukh, a political prisoner, the defendant in the “Vedzhie Kashka’s Case”, went on a hunger strike on September 15, demanding either the turn his term of imprisonment into a house arrest, or getting a proper medical care. Asanov is 66 years old, and he has a poor health. The Ministry of Foreign Affairs of Ukraine made a statement on the Chapukh’s hunger strike, emphasizing that the failure to provide him with a medical assistance is a continuation of the torture history in Russian detention institutions. Due to an even more serious health deterioration, Asan stopped a hunger strike on the seventh day of it. Three days later, his health deteriorated sharply, and Asan was taken to the hospital.

The non-admission of Ukrainian human rights activists to an information on the status of the Kremlin’s political prisoners remains a topical issue. Despite the Volodymyr Balukh’s lawyer statements about Volodymyr’s health deterioration, the administration of the colony where he is detained refuses to provide the results of medical examinations. According to the office of the Authorized Representative of the Verkhovna Rada of Ukraine, the health of Evhen Panov and Bekir Degermendzhi, political prisoners, had deteriorated. The Office of the Commissioner has not received any response from the SIZO-1 administration, where Panov and Degermendzhi are held. At the same time, another political prisoner, Yevhen Karakashev, is constantly refused medical treatment in a SIZO – for several weeks on a daily basis he has been unsuccessfully filing applications to the SIZO administration for medical consultation. An investigator in the case of another political prisoner, Ismail Ramazanov, denied his lawyer, Aleksey Ladin, in appeals for appointed court examinations. Other political prisoners, Resul Velilyaev and Ali Bariyev, got their detention period extended by a Moscow court. And “Ukrainian saboteur” Henadiy Limeshko, who is sentenced to 8 years imprisonment, was convoyed to the Stavropol Territory of the Russian Federation.