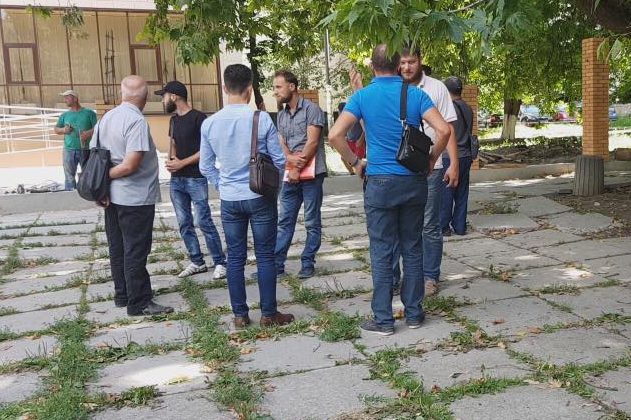 The Supreme Court of Crimea left the participant Aider Saledinov under arrest of the Simferopol case “Hizb ut-Tahrir”. This was reported on Facebook by the “Crimean solidarity” association.

Saledinov will remain under arrest until September 11.

Saledinov’s interests were represented by a lawyer on purpose. The relatives of the accused were not permitted to the courtroom.

Aidera Saledinova, Uzeyir Abdullayev, Rustem Ismailov and Emil Dzhemadenov are accused of the involvement in the activities of the terrorist organization Hizb ut-Tahrir (ch. 2 art. 205.5 CC), Teymur Abdullaev – in the organization of the cell (p. 1 article. 205.5 CC). This is the fourth case against the alleged members of Hizb ut-Tahrir, which was engaged on the territory of Crimea.
All five defendants were detained and arrested in November 2016 after a series of searches in homes of Crimean Tatars. In December of the same year, Saledinov, Ismailov and Uzeir Abdullayev stated that they were beaten by FSB agents while being transported to the investigative activities.
“Hizb ut-Tahrir” is recognized in the territory of Russia as a terrorist organization. In different regions of the country, terrorism cases have been started, while members of the organization’s cells are accused and sentenced to various terms in the strict regime colony only on the grounds of having met in apartments, read religious literature and recruited new members.

According to some experts, Hizb ut-Tahrir is recognized as a terrorist organization illegitimately, as its participants in Russia did not prepare or carry out terrorist acts.