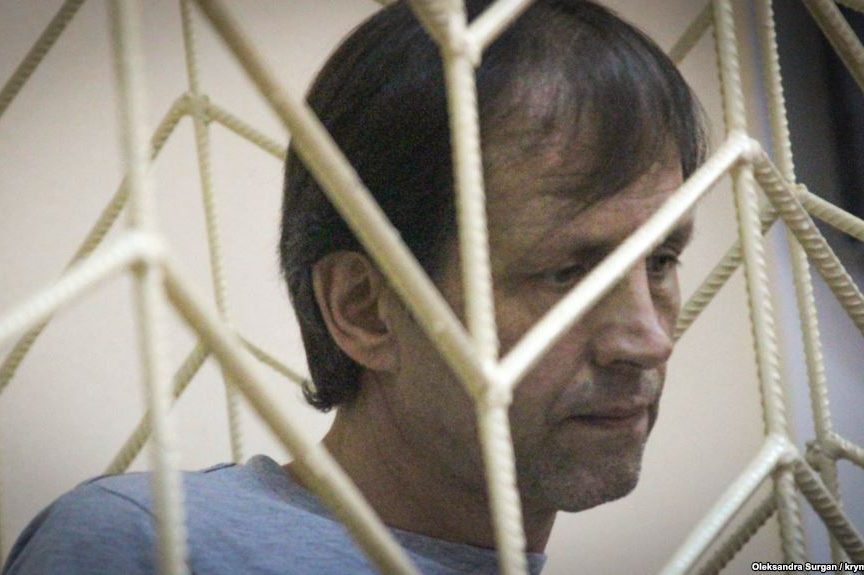 Razdolnensky District Court sentenced the Ukrainian activist Vladimir Balukh to 5 years in a general regime colony and was fined with 10 thousand rubles (about 4 thousand hryvnia). As the correspondent of Crimea.Reality reported from the courtroom, the activist was sentenced to such prison term for the aggregate of two criminal cases.

In the verdict, the judge announced that Balukh committed a crime in connection with “hostility towards the current system of government, as evidenced by earlier committed crimes.”

On July 2nd, the Russian prosecutor requested four years of a general regime colony for Balukh on the charge of disrupting the prison station work, and taking his first criminal sentence into account – 6 years in a general-regime colony and a fine of 10,000 rubles (4,000 hryvnia)

This case against the activist was initiated because of the statement of the head of the temporary detention facility Valeria Tkachenko in the village of Razdolnoe, who claims that Balukh has beaten him. In this case, the activist himself and his defense declare that it was Tkachenko who attacked him.

Earlier, the court extended the measure of restraint in the form of a custody of the Ukrainian activist until August 14.

Balukh continues the indefinite hunger strike, which he declared on March 19, 2018.

The FSB of Russia detained Vladimir Balukh on December 8, 2016. Employees of the FSB claimed that they found 90 rounds and several TNT checkers in the attic of the house where Vladimir Balukh lives. The court in Crimea recognized Balukh guilty of ammunition possession and sentenced him to 3 years and 5 months in prison colony, as well as a fine of 10 thousand rubles (about 4600 hryvnia).

The defense of Balukh and human rights activists assert that he was a victim of repression for his pro-Ukrainian position – because of the flag of Ukraine, which was in the courtyard of his house.

The Foreign Ministry of Ukraine and the United States insist on the release by the Russian authorities of the Ukrainian activist Vladimir Balukh.