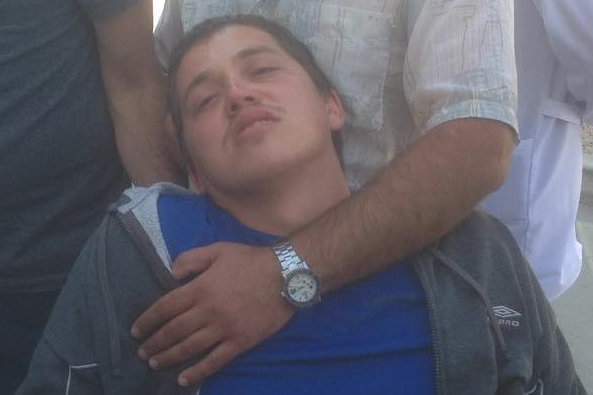 Andriy Sushko, a Ukrainian turncoat now working for the Russian FSB in occupied Crimea has been added to the United States’ sanctions list for his role in the abduction and savage torture of Rinat Paralamov in September 2017.  Sushko is just one of the people whom human rights groups have identified as candidates deserving to be sanctioned, and the move by the US Department of the Treasury’s Office of Foreign Assets Control (OFAC) is extremely welcome.  The notification points to Sushko’s part in torture, including beatings and electric shocks, that could easily have resulted in Paralamov’s death.

Paralamov  himself responded to the news by expressing the hope that it might make others think about what they are committing.

As reported, masked men turned up at the Paralamov  home in the early morning of September 13, 2017 and carried out what they tried to call “an inspection”.

They did not identify themselves, and the two men who had insignia indicating the FSB [Russian security service] sought to conceal this after a large number of neighbours and friends gathered.

Paralamov  was taken away and throughout Wednesday every police and FSB office in Crimea denied any knowledge of his whereabouts.

By the following day, when the search for him resumed, enforcement bodies admitted that he was at the FSB in Simferopol being questioned.  This, they claimed most absurdly, was because Paralamov  had himself appeared voluntarily at the FSB “to add something to his explanation” after having been released at 16.00 on the day of his abduction.

The FSB dumped Paralamov in the early afternoon of 14 September at the coach station, from where he was rescued in a shocking state.  He was taken to hospital scarcely able to walk and totally incapable of speaking.

Paralamov found the courage that same evening to reveal the torture he had been exposed to.  He was only able to give full details, however, at a press conference on 2 November, after the 31-year-old father of four knew that his family was safely in Kyiv. He expressed the hope then that his refusal to remain silent would help to prevent the number of victims of such torture from becoming even higher.

He explained then that he didn’t know why they had targeted him, but that he had taken an active part in collecting money to pay the ever-increasing number of fines which the Russian occupation regime is using to try to crush opposition.  He had also never concealed his religious views, nor his attitude to the “given situation on the peninsula”.

Paralamov had refused to sign the document that the men who burst into their home put in front of him (which sanctioned only an ‘inspection’) and also demanded that they call different ‘witnesses’, not those whom they had, in breach of the law, brought with them.

He was not informed of any charges, etc., simply forced into their car and taken away, with a bag over his head and in handcuffs.  He was taken to a building, where most of the torture took place.

They began by asking basic questions.  Paralamov, who still had a bag over his head, immediately cited his constitutional right to not answer, and demanded to have a lawyer present.  The men laughed, and then a man, whose voice Paralamov recognized as being one of the men who’d arrived at his home, came up and punched him in the chest, saying that he was his ‘lawyer’.  The next punch was to the back of the neck.

After that they used electric shocks from which he several times lost consciousness.  At one point they clearly got worried that they had killed him and stopped for a while.  They brought in a woman in a white coat who gave him some kind of injection, then pulled his jaw and said he was pretending when he showed it was painful, saying that he’d been given an injection.

This so-called doctor then left and the torture continued.  Paralamov  was in obvious distress as he described how they had threatened to rape first him, using barbed wire, then his wife.

It was after this that he agreed to sign their documents.  One was an ‘interrogation’ protocol in which he ‘confessed’ to having found an explosive substance and bullets and hidden them, that he was a member of Hizb ut-Tahrir, the peaceful pan-Islamist organization which is legal in Ukraine and most countries, but which Russia has claimed is ‘terrorist’, etc.

They also got him to sign a document saying he had left the FSB at 4 p.m. on 13 September, and ‘voluntarily’ returned to confess the following day after spending the night in a park.  Another document claimed that he had “voluntarily agreed to cooperate with the security service’.

They did not specify what exactly his ‘cooperation’ was to entail, but did get him to speak on a video, both then and the following day in the forest where he supposedly indicated where he had found the secret stock of explosives.

Paralamov  himself was told that he would be put on trial in about six months and would get a three-year suspended sentence.  They said that they would provide their ‘lawyer’ so that he didn’t turn to independent lawyers like Semedlyaev and Emil Kurbedinov.  If he tried to run away, they said, they would pass to the media his ‘agreement’ to collaborate with them.

The FSB had, once again, miscalculated.  There was immense concern and widespread publicity after Paralamov  was taken away and simply disappeared, and there was no possibility at all of hiding the shocking state he was in when simply dumped by the FSB at the Simferopol coach station.  It is an indicator of the regime of terror that the FSB has imposed that the first two hospitals they tried to take Paralamov  to refused to admit him, although he was very clearly in need of hospital care.

The torture he was subjected to was also widely reported, as was the detention of Emil Kurbedinov and a number of Crimean Tatar activists who were waiting with Paralamov’s mother the next day as she demanded, without success, to see the head of the FSB.  They were detained after Paralamov  recognized Sushko as one of his abductors and torturers.

Since then, the de facto military prosecutor in occupied Crimea has refused to initiate criminal proceedings against the FSB officers over their abduction and torture of Paralamov. Instead, two criminal investigations were launched against the victim on explosives charges.