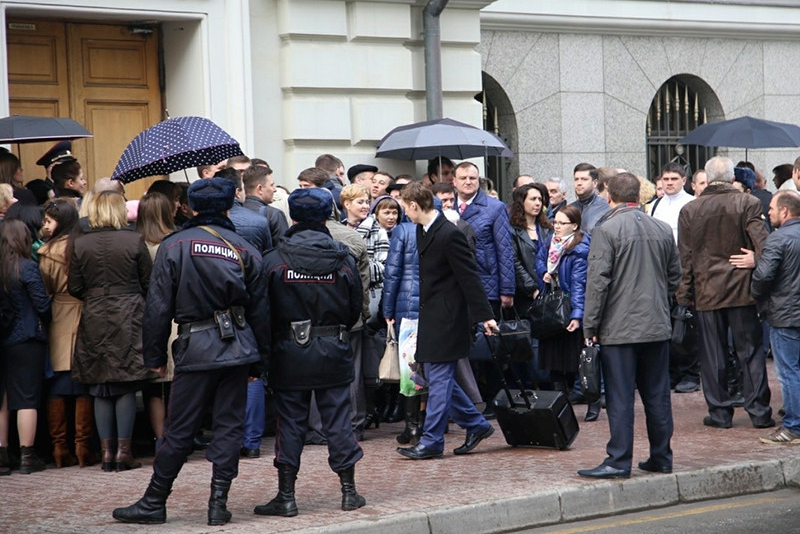 In the city of Dzhankoy, located in northern Crimea, FSB officers searched members of the Jehovah’s Witnesses, an organization that is currently banned in Russia. According to the TV channel Vesti-Crimea, searches were carried out at 30 different addresses. Later, “Novaya Gazeta” reporter in Crimea, Anton Naumlyuk, clarified that searches at only five addresses were confirmed.

A criminal case has been opened against the former head of the regional branch of Jehovah’s Witnesses, Sergei Filatov, accusing him of organizing activities for an extremist organization, the channel reported. An employee of “Vesti” said that authorities allegedly found extremist literature and reference books on psychology and recruitment in Filatov’s possession. Two members of his family as well as several other people who were also subject to searches are witnesses in this case.

A case was opened against Sergey Filatov, a resident of the Crimean city of Dzhankoy. He is charged with organizing the activities of a religious network recognized by the court as an extremist entity (Article 282.2, paragraph 1 of the Criminal Code), the suspect’s lawyer Alexey Ladin of the international human rights group “Agora” said.

According to the investigators, some time before October 2017, Filatov organized a “Sivash” cell in Dzhankoy, which is a structural part of the “Administrative Center of the Jehovah’s Witnesses.” He held public meetings and gave speeches promoting the ideas of this religious movement.

The Ukrainian “Jehovah’s Witnesses Center” is distressed by searches and arrests of their fellow believers in Russia annexed Crimea. The announcement was made on November 16 by Ivan Rieger, the representative of the public relations organization.

“We cannot provide any additional details besides those mentioned in the news in order to ensure the safety of the believers who are currently living and will live there in the future. We are saddened that our fellow believers, who are peaceful and law-abiding people, have to experience such an unfair attitude towards them. The only thing I want to say is that there was one believer who was repressed by the Soviet authorities in the 90s. He was rehabilitated and for the same views he is again being persecuted, ” said Rieger.

“This situation only arouses compassion and sadness in our hearts for the victims. Here we are talking about people who have done no harm to others. The European Court has already noted that it is a well-known Christian religion that professes pacifist views. We can firmly say that “Jehovah’s Witnesses” lead a way of life that is in line with the fundamental interests of society and its citizens, ” Rieger added.

In April of 2017, the Russian Supreme Court declared the Jehovah’s Witnesses an extremist organization. Since then, its followers have become defendants in numerous criminal cases. In November, mass searches related to the case based on the organization’s banned status took place in Krasnoyarsk.