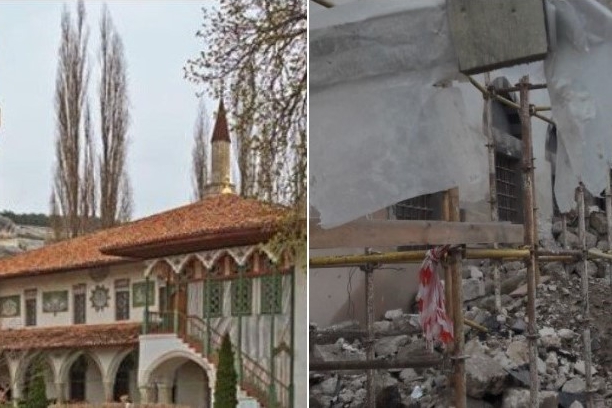 A St. Petersburg company has won a tender for Russia’s so-called ‘restoration work’ of the 16th century Khan’s Palace in Bakhchysarai, which, under other contractors has already caused irreparable damage  to a site of immense importance to Crimean Tatars. The ‘Meander’ Company is currently winning a suspicious number of high-cost tenders for supposedly ‘restoring’ the many places of cultural heritage that Russia has illegally appropriated in annexed Crimea.  Its meteoric success does not appear to be attributable to any experience in restoration and may, instead, be connected with a high-ranking real owner, with the Russian Minister of Culture, Vladimir Medinsky, considered the most likely candidate. Writes khpg.org

Yevhen Leshan, from the Centre for Journalist Investigations, has studied Russia’s information about state tenders.  This states that Meander has won the tender to do the design support documentation for restoration of the main building of the Khan’s Palace, as well, according to another contract, as restoration of the Count Corps; the Khan’s kitchen; the Stables corps; the library block and the Falcon Tower.  The first contract is for 66.6 million roubles (almost 900 thousand euros), the second – 70.4 million.

This is just a small part of the staggering two billion roubles (around 26.5 million euros) that Meander has or will receive from tenders won over the last two years for work in occupied Crimea.  Nor is Russia confining its attention, and its allocation of juicy tenders, to the Khan’s Palace in Bakhchysarai.  Meander has also received a contract for work on the Vorontsov Palace in Alupta, to the tune of a further 367 million roubles, as well as numerous other historic sites.

The choicest contract, however, is for the construction of a ‘Crimean state centre for children’s theatre’ on the site in Simferopol, close to the Crimean Parliament, of the old Puppet Theatre which Russia pulled down after annexing Crimea.  The cost of this new and very kitsch construction is for the moment 930 million roubles, of which around a third has already been paid.

Meander has clearly had its own way around normal tender procedure.  There was an earlier scandal in 2016 when Meander proved to have begun work on ‘restoring’ and renaming the historic ‘Ukraina’ Theatre in Sevastopol well over a month before it officially won the tender for just over 100 million roubles.

There is nothing on the company’s site to indicate that Meander’s success is due to vast experience in carrying out restoration work on such places of cultural heritage.  Only various types of construction work are mentioned.

Nor is there anything in Russia’s register of legal entities to indicate that they have the appropriate licences, though the company’s own website presents a scan of such a certificate, issued by the Ministry of Culture. There is also a licence to carry out work “with the use of information containing state secrets”, which shows that this is a company trusted by the Russian authorities.

It is not only the access to state secrets that indicates such connections.  Meander has, since 2013, built up a portfolio of state tenders amounting to 8.5 billion roubles, making it the leader of the St Petersburg mark in restoration work or, at least, in receipt of tenders for such work.  The vast of contracts are for work on sites in some way under the jurisdiction of the Ministry of Culture.

Such a phenomenally successful company has supposedly been run by Yelena Zavadskaya since 2015, and owned by this young woman since 2017.  Her allegedly top post coincides with the period in which Meander has made such stupendous gains via state tenders in occupied Crimea.  Leshan writes that most Crimean and Russian media assume that the real owner is Medinsky.

Meander has now, unfortunately, been let loose on Crimea’s cultural and historic legacy. The manner in which it has gained so many lucrative jobs simply reeks of corruption. This, however, as Leshan points out, is what all occupying regimes do on seized territory to syphon off all that is of material and cultural value.

As reported, massive damage has already been done to the Khan’s Palace, or HanSaray in Bakhchysarai, a site of enormous historical and cultural significance for Crimean Tatars and, in general, for Ukraine.

The complex was placed on UNESCO’s World Heritage Tentative List back in 2003, although the follow-up work had not been carried out at the time of Russia’s invasion and annexation in 2014.   The devastation already caused by what Russia is calling ‘restoration’ and urgent repairs is already so great that the opportunity for recognition of the Khan’s Palace’s unique status has probably been lost.

Any restoration work needed to be carried out by specialists after study of what was required, and with maximum use of the same materials and technology.  Instead, the work was passed to a construction firm called Kiramet, working for the Moscow-based Atta Group Architectural and Planning Holdingas General Contractor. Neither had any experience in restoration work, and there is nothing to suggest that the mandatory expert assessment was carried out.

The devastation caused was simply barbaric, and so clearly unwarranted that it seems likely that much of the original materials that were ripped off were either sold or simply appropriate for various top officials’ dachas, etc.  Small wonder that the contractors tried very hard to keep people away from the complex.

In a video posted on 11 April 2018, after several months of such work, Edem Dudakov, a former head of the Committee for Inter-ethnic Relations and Deported Peoples, showed how the original hand-made tiles, called Tatarka, were being replaced in full by factory-produced ‘old-style’ Spanish titles.  While individual Tatarka tiles had needed to be replaced, there was absolutely no justification for removing all of these infinitely richer and authentic tiles.  Dudakov assumed that the boring, factory produced Spanish tiles had been chosen because they were easier to lay, because they did not have any specialists working with Tatarka files, and also because they were easier to loot.  The original Tatarka tiles had reportedly already been sold, with this quite likely what happened to the authentic oak beams which were unnecessarily removed.

Even where there was no obvious aim to plunder, the fact that the work was carried out by construction workers without any experience in restoration meant that huge damage was done.  The walls became damp, and no attempt was made to protect the wall paintings which were simply disintegrating.   Dudakov reported that these barbarians had decided that one calligraphic fresco on the eastern façade “was of no value” and had effectively destroyed it.

Heavy construction equipment, such as hydraulic drills, had been used for dismantling work, with this causing vibration and the loss of part of the wall’s finish.

Any century-old construction needs work carried out on it, but not with entire parts dismantled, nor with fine original materials being replaced by concrete or plywood-like glue composite planks put together using OSB {oriented strand board) technology.  Not, that is, unless the occupiers’ main aim is to plunder as much as they can get, with no concern for the historic and cultural heritage they trample and destroy.