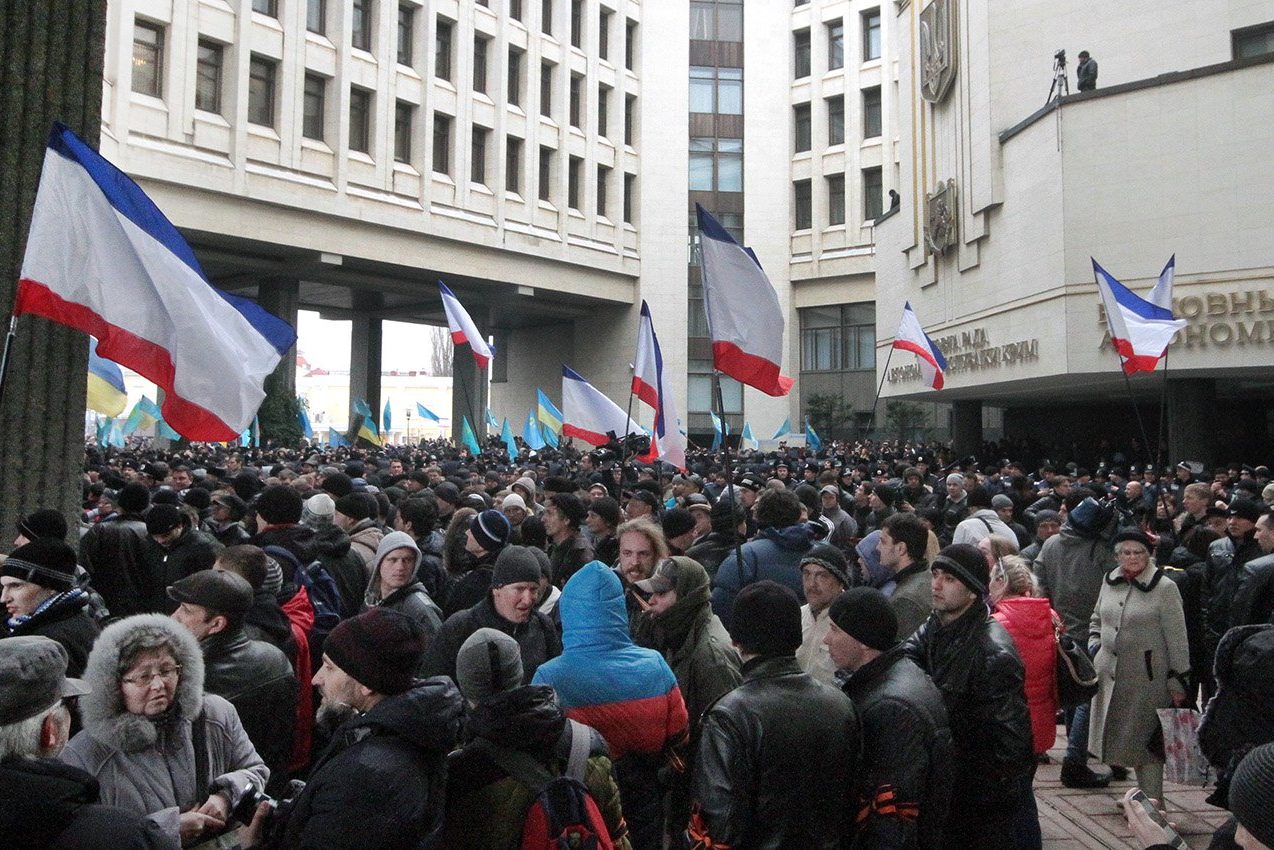 The judge of the Central District Court of Simferopol, Sergei Demenok, appointed the suspended sentences to the five participants of the “26 February case”. Ali Asanov and Mustafa Degermendji were sentenced to four and a half years in prison, Arsen Yunusov and Eskender Kantemirov were sentenced to four years, and Eskender Emirvaliyev received a suspended sentence of three years. Each will be on probation for three years.

All the defendants were convicted for participation in mass riots (part 2 of Article 212 of the Criminal Code). Asanov and Degermendzhi did not admit their guilt, the rest of the defendants admitted part of the accusations.

In the course of the debate, prosecutor Dmitriy Taran, who filed the prosecution, asked him to sentence Asanov and DeGermendzhi to five years’ imprisonment conditionally, and Yunusov, Kantemirov and Emirvaliev to three and a half years on probation.

February 26, 2014, a rally organized by the Mejlis of the Crimean Tatar people near the Parliament of Crimea in Simferopol turned into clashes with the pro-Russian activists that gathered there and resulted in a crush in which two people died. The next day, the Parliament of the Autonomous Republic was seized by unknown armed people – later Moscow recognized that it was the Russian special forces.

11 months later, on January 26th 2015 the officers of the FSB, the police and the Investigative Committee seized video records of events from the Verkhovna Rada in the Crimean Tatar television channel ATR.

On January 29th, the Crimean prosecutor Natalia Poklonskaya reported that she provided “the materials concerning persons who participated in riots on the territory of Crimea the previous year, as a result of which two people were killed, and six people suffered moderate bodily injuries” to the investigating authorities. On the same day in Crimea, the Deputy Chairman of the Mejlis of the Crimean Tatar people Akhtem Chiyhoz was detained; the detention of other persons involved in the “26th of February case” continued in Crimea until June 2015. Eskender Nebiev and Talat Yunusov who worked as an ATR operator pleaded guilty last year and were convicted according to a special procedure and sentenced to 2.5 years of probation.

In February of 2016 the Supreme Court of Crimea returned the case to the prosecutor’s office. Poklonskaya stated that she considers this decision illegal and unreasonable, and later appealed to it, noting that “the shortcomings indicated by the court could be eliminated in the course of judicial consideration.” At the same time, “Memorial” recognized Chiygoz, Asanov and Degermendzhi as political prisoners. “We doubt the organized nature of the violence that took place on the courtyard in front of the Supreme Council of Crimea. In our opinion, the accusations of the “crush organization” are a speculation: “the crush in the center of the crowd is equally dangerous to both sides of the conflict, ” the website of the human rights center said.

In July 2016, the case was again submitted to the Supreme Court of Crimea, which at the preliminary hearing decided to divide it: materials regarding the accused under the heavier part 1 of Article 212 (organization of mass riots) Chiigoza remained in the Armed Forces, and the cases of other defendants, accused only of participation in the riots, were transferred to the Central District Court of Simferopol.

In September 2016 the Mejlis of the Crimean Tatar people was recognized as an extremist organization, its activities in Russia are prohibited.

In April 2017 the Central court changed the measure of the restraint of Ali Asanov and Mustafa DeGermendzhi, after having them released for two years from the detention center for house arrest. Kantemirov, Arsen Yunusov and Emirvaliev during the investigation and the process were under a written undertaking not to leave the country.

In September, 2017, the Supreme Court of Crimea sentenced Akhtem Chyigoz to 8 years of imprisonment but he was released at the end of October already, together with Ilmi Umerov, the Deputy Chairman of the Mejlis, who was also convicted for his calls for separatism (according to Part 2 of Article 280.1), and they both were taken to Turkey where they left forward to Ukraine. On what grounds Chiygoz and Umerov were released, was not officially reported. The latter’s lawyers asked Vladimir Putin’s decree on pardon in the presidential administration, but they did not receive a document: “It is not possible to provide information that you are interested in,” the AP responded. According to one of the leaders of the Crimean Tatars Mustafa Dzhemilev, the pardon was made possible thanks to the intervention of the Turkish President Recep Tayyip Erdogan.