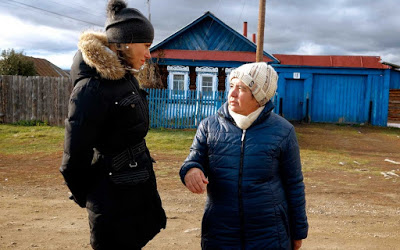 As the head of the NGO Planet of Hopes [Planeta Nadezhd], Nadejda Kutepova has fought for fifteen years for the victims of radioactive contamination in the Urals, near the Maiak factory which, in 1957, gave the world its first nuclear catastrophe. In July, she was forced by circumstances to dissolve the NGO and leave Russia. This Friday, October 2nd, as Francois Hollande receives Vladimir Putin in Paris, she is asking for asylum in France.

As the head of the NGO Planet of Hopes [Planeta Nadezhd], Nadejda Kutepova has fought for fifteen years for the victims of radioactive contamination in the Urals, near the Maiak factory which, in 1957, gave the world its first nuclear catastrophe. In July, she was forced by circumstances to dissolve the NGO and leave Russia. This Friday, October 2nd, as Francois Hollande receives Vladimir Putin in Paris, she is asking for asylum in France.

Nadejda Kutepova (left) in a photo from the Radio-Canada report on radiological contamination in the Southern Urals.

A lot of people have been embittered by this history. My mother, who received no compensation as the widow of a liquidator, lost all confidence in justice. She was demented in her final days.
Yet the inhabitants of the region are not completely beat. There is presently a protest movement against Russian Copper Company which mines copper in the region and wants to be the national leader in copper extraction.
You have been in France since July, in Paris, and on October 2nd you are applying for asylum. Why did you leave Russia?
Our NGO came under increasing pressure over the years. In 2004, a law was passed to make it illegal to do sociological research in the Ozersk region, under the pretext that it threatened national security.
Starting in 2008, we were ordered to pay tax on our “profits.” We refused because we are financed by donations and we are non-profit. Next they tried to intimidate us. I was watched and harassed. But we won the game in court.
In 2012, a law enacted by the Duma put controls on NGOs that received donations from abroad. They were considered as “foreign agents.” So we organized a public meeting to explain that we are not foreign agents because in our activities we consult the local population. We work only for Russians.
But in April of this year, the authorities put us on their list of foreign agents. They accused us of two things: receiving financing from the United States, and “political activities.” This latter accusation concerns two interviews that I gave, one to an ecology magazine in which I discussed Article 42 of the constitution that grants the right to compensation when one is the victim of an environmental disaster. I criticized the way the courts were circumventing Article 42. The other interview was with the nuclear information website Bellona. I spoke of the deaths of children of liquidators and I also criticized the Russian courts.
In May, the pressure continued. The court in Ozersk ordered us to pay 900,000 rubles (4,000 euro) for not having registered with the authorities as foreign agents. All of a sudden, Rossia 24, one of the leading national media networks, broadcast an “assassin report” about us. My face was there at the top of the news, my views were misrepresented, and I was accused of industrial espionage. Journalists came and filmed my house. The question is this: how did they get the permits to enter Ozersk, which is still a closed city?
After this, my supporters encouraged me to leave Russia. Since then, I have been added to a list of persons declared “undesirable” by the Duma. This indicates that I could be imprisoned. At the end of June, a new report was broadcast on television. We decided to dissolve the NGO. On July 7, with my children I left for Paris as discretely as possible.
How do you explain the reaction by the media and the Russian authorities?
The general policy is that the United States is our enemy. We are surrounded by enemies. Whoever receives aid from enemies is an enemy also. Then there are the local interests. FSB Ozersk is not eager to have people know about the ecological catastrophe of the region. These interests merge with national interests.
http://nf2045.blogspot.jp